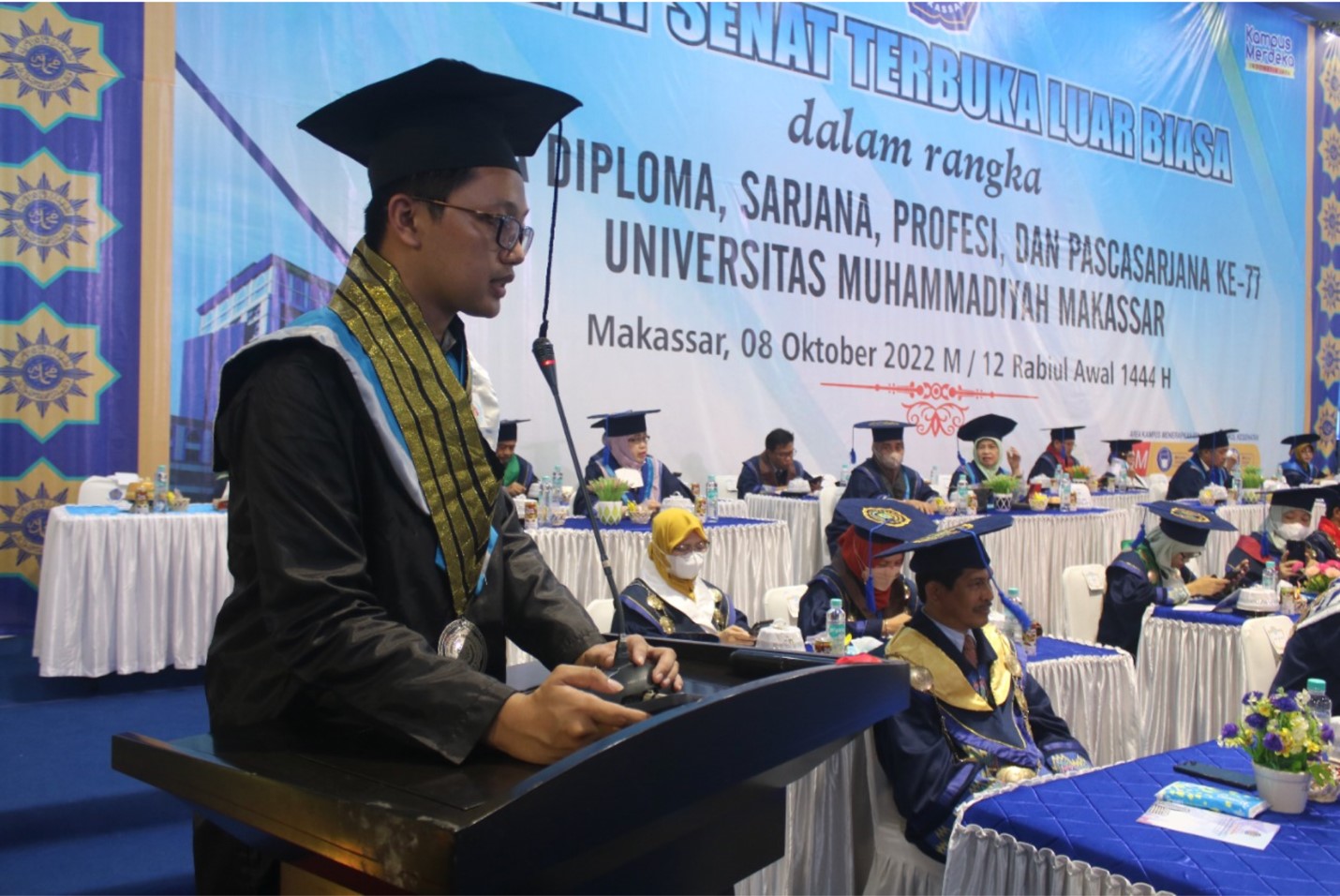 Doctor’s Profession Study Program FKIK Unismuh– Doctor Dzar Fadli El Furqan from the Doctor’s Profession Study Program of the Faculty of Medicine was designated as the Best Graduate at the 77th Graduation Ceremony of Universitas Muhammadiyah (Unismuh) Makassar, at the Muktamar Hall 47 Unismuh Makassar Campus, Saturday, October 08, 2022.
Dzar Fadli, who was born in Malang, East Java, completed his studies in two years and six months, with a Grade Point Average (GPA) of 3.90.
“Furthermore, those who are declared the best graduates at the university level who are given the opportunity to continue their Masters at university expense are Dzar Fadli El Furqan Bachelor of Medicine, Doctor Professional Study Program, Faculty of Medicine and Health Sciences,” said Unismuh Rector Prof. Ambo Asse in his speech.
Active in Organization
Dzar Fadli El Furqan completed his primary and secondary education at SD Inpres Bonto-bontoa, Gowa, SMP Negeri 4 Gowa, and SMA N 1 Gowa. Furthermore, he has been studying at Unismuh since 2015 by taking the Bachelor of Medical Education Study Program, and continuing the Doctor Professional Study Program.
“I entered the Faculty of Medicine with the mindset that I must study hard and prioritize academics. So in the beginning we were patterned to focus on academics only. But along the way we realized that the learning process at university is not limited to academics alone,” said Fadli, his nickname, when contacted after the graduation procession.
Finally, he began to be active in organizations, actively participating in various additional training outside the study program, including Darul Arqam Dasar (DAD), Darul Arqam Menengah (DAM), Basic Instructor Training (LID), and Intermediate Instructor Training (ILM) of the Muhammadiyah Student Association (IMM).
Fadli then won the trust to become Chairman of the Commissariat Leadership (Pikom) IMM Faculty of Medicine and Health Sciences, then became Chairman of the Student Executive Board (BEM) FKIK Unismuh Makassar.
He admits that balancing academic and organizational activities is not easy. “The biggest challenge is always related to the super busy academic schedule and formal curriculum, especially in professional education with activities in hospitals. It often has the potential to trigger problems. Alhamdulillah, we can get through these things well,” he continued.
Fadli said the key is good time management. “Many of us have actually been very good at prioritizing agendas and others, but are constrained in the execution area,” he said.
According to him, although planning has been well organized, humans are also biological creatures. “Our behavior and mood, such as enthusiasm or laziness, are actually regulated by hormones in the body. So biological management through the process of meditation; spiritual activities, also play an important role for us,” said the IMM activist.
International Experience and Scientific Publications
The son of Abdul Rakhim Nanda and Nurnawaty, he is not only involved in the Unismuh Makassar campus. He also actively participates in various activities outside the campus, including abroad, including the International Medical Olympiad (IMO) Delegation in the Cardiorespiratory System branch, FK Pelita Harapan University, Tangerang 2016.
During his time as a student, Fadli had a number of international experiences, such as participating in the Community Development Excursion Study Siangapura-Malaysia-Thailand in 2019. He also attended the ‘Istanbul Youth Summit’ which discussed Community Development. He has also participated in the Study Tour of FPSK USIM and FPSK UPM Malaysia.
With this experience, Dzar was designated as the Third Best Outstanding Student of Muhammadiyah Makassar University for Internationalization.
In addition to studying with his friends, Fadli was also given the trust to become an Assistant Lecturer at the Department of Physiology FK Unismuh Makassar, and now as an Intern Lecturer at the Department of Anatomy FKIK Unismuh Makassar.
As an assistant lecturer, he does not only teach. Fadli also wrote scientific publications including “The Effect of Aloe Extract (Sanseveria trifasciata) in Reducing Carbon Monoxide Levels due to Sidestream Smoke of Filter Cigarettes”, in Al-Iqra Medical Journal, 2021 (Sinta 4), and “The Effect of Giving Black Cumin Oil (Nigella sativa) on the Growth of Staphylococcus aureus Bacteria”, in the Syiah Kuala Medical Journal (Sinta 3), still in the review process.
Humanitarian Volunteer
As a medical student, Dzar Fadli is also involved as a humanitarian volunteer, including the MDMC South Sulawesi – MDMC Luwu Raya Medical Team, Masamba Flash Flood 2020, and MCCC Makassar City Public Health Division 2020-2022.
“The longest volunteer experience I participated in was during the Masamba flash flood at the end of 2020, along with covid. It was a dilemma yesterday because of the handling of the flood disaster at a time when the COVID-19 delta case was rampant,” he recalled.
In that disaster, he worked as a volunteer for MDMC South Sulawesi for 4 weeks, moving from one post to another.

“There are posts that have rooms, some are in tents or temporary shelters, and in mosques according to the availability of the posts. We do check-ups, wound care, and mental health education because many were traumatized, even hearing the sound of rain immediately became hysterical,” said Fadli.
He was also involved as a volunteer in the Majene earthquake. “The rest of the time, we mostly do social service activities such as health checks and mass circumcisions,” he said.
Fadli’s achievements to date cannot be separated from the services of many people. In particular, he mentions his parents who have contributed the most to his life journey.
In addition, he also mentioned three names, namely Dr. Mahmud Ghaznawie PhD, Prof. Suryani As’ad, and Dr. Irwan Ashari, as mentors in his academic career. “Of course, all FKIK lecturers who I cannot mention one by one,” he continued.
In the future, Fadli plans to study clinical specialties. “I am also very interested in studying the field of Public Health and ethical medicine relations in the health interprofession,” he concluded.
Source: https://news.unismuh.ac.id/2022/10/08/berbekal-pengalaman-ilmiah-internasional-dzar-fadli-el-furqan-jadi-wisudawan-terbaik-unismuh/